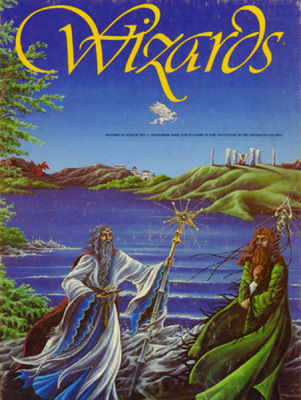 These rules are for the Avalon Hill classic, Wizards. It's a strange game in that it's not a competition between the players, but together they need to stave off evil. As written, however, it's too easy. Just about every group who plays Wizards regularly has come up with tinkers to make it more of a challenge.

Below the optional rules are also some tinkers and clarifications to the regular rules. We've attempted the mildest fix possible for the endgame. Don Woods took another approach to tinkering with the endgame.

Give Evil a Chance

My favorite tinker to give evil a chance is to allow demons to stack. In the original game, only one demon was allowed per hex. No more. Moreover, a player may only use his Demon Dispell spell once per hex, so if he hits a stack, he may dispell the first demon, but after that, he's on his own. If a player is transported to a new space, he may use a demon dispell spell in the new space. Transporting also resets lair time. This can be quite important, as the Dragon's Lair sometimes fills up with demon stacks. Encountering these can cause "Demon Surfing."

Fortnights are too long. After the 2nd fortnight (shortening these two makes it nearly impossible to become a druid or sorcerer), change the length of the fortnights to one of:

Give Druids a Chance

Being a druid is just too frustrating. We allow druids to be able to (assuming they have the movement points) walk onto the sacred circle. That ends their movement. They still have to roll to see Ruktal.

Many quests provide Magical Items. But they don't do anything. No more. Players hold onto Task cards if an item is useful. If their Magical Items are stolen, these items are lost as well. Note that these rules give a moderate (but not as much as you might think) advantage to the players. Items are not usable by the players until the task is completed, no matter whether or not the item is in the player's possession. (He hasn't been told the magic word that activates it.) If anyone has a good set of clip art to make good cards for some or all of these items, I'd be glad to collect it and give credit where due.

"One Use" items are just that. Once used, they are discarded. Some items are very powerful; they are marked with an asterisk (*). If you feel that they are too good, some lesser versions are listed below. I'd go with the good version. Typically, magic items don't stay around all that long anyway. Magic items cannot be traded between players. Tasks with items that are for one class only are discarded if drawn by the wrong class. If this is overlooked, the item is powerless. If the Task is traded to a player of the wrong class, it can be completed, but the item is useless. Any item that provides a spell, but doesn't specify otherwise, requires the normal roll (1-5) for success. The item, however, can be used outside the normal requirements. Animal Summoning may not be performed if an animal is present.

1. Sacred Book: May enter Sacred Circle as Druid. 1 Use
2. Magic Amulet: May avoid all dragon encounters.
4. Charmed Bracelet: Swiftness through mountains and woods. 1 Use
5. Stargild: Demon Dispell spell. Once 6 points are gained from use, transport to Starcrest immediately and return Stargild. Encounter Starcrest as normal.
7. Ancient Runesword: Never fail Demon Dispell spell. Permanent. *
9. Magical Book: Boat Summoning Unlimited. 1 Use
10. Wand of Corruption: Immediately when task is drawn, provided that it is possible that it can be fulfilled, the next appropriate island sinks. (Use the normal rules for choosing which island sinks.) This Task MUST be completed or the players lose the game. If the spell of spells is cast while this task is in play, the spell fails. If the items that begin this task are ever stolen, or the task is lost from play incomplete by any means, the game is lost. Evil Wins. Suggestion: don't start this until at least 3rd level. (*)
11. Wild Herbs: Heal Demondazed. 1 Use
12. Jeweled Sword: No harm results from Common Town encounter rolls 1-3 to the owner.
18. Jeweled Crown: +1 movement spell, permanent. Works on 1-3 on D6.
19. Sacred Bells: 5 points of any type. May be split. Use immediately.
21. Golden Harp: +1 spell rolls (so most spells are automatic). Permanent. Druids Only. (*)
22. Four Magical Rods: Add 1 movement before roll. 4 uses.
24. Magic Vial and Vase: -1 Elf encounter. 1 Use
25. Three Parchments: Take an optional Task. 1 Use
26. Wizard's Letter: Take an optional Task. 1 Use
27. Two Coins and a Singing Lyre: Animal Summoning. 1 Use
28. Sack of Gold: Result 5 in Common encounter. Use before roll. 1 Use
14, 29. Magic Sword: Demon Dispell spell. May be used on multiple demons in a turn.
31. Crystal Ball: Choose island to sink. 1 Use
32. Swan which lays Silver Eggs: Animal Summoning. 1 Use
34. Staff of Windstar: +1 movement in sorcerous mountains. Permanent.
35. Staff of Power: +1 spell rolls. Permanent. Wizards Only. (*)
37. Jaded Brooch: Only object stolen. 1 Use
38. Old Manuscript: Learn Animal Summoning Spell
39. Starsparks: Add one to movement rolls aboard boats. 1 full trip only
40. Lorebook: retrieve one Task Marker. 1 Use
43. Bark from Birch Tree: +5 Boat Summoning, if spell known
44. Magical Spice: Heals demondazed. 1 Use
52. Healing Ointment: Heals demondazed. 1 Use
53. Fruit: Animal Summoning. 1 use
54. Dragon's Egg: Dragon Taming. 1 use
61. Six Rare Herbs: Heals Demondazed. 1 Use
62. Magic Crystal Chalice: Other players encountering you also encounter Shrineheart Abbey.
64. Dragon's Teeth: Successful Dragon Taming spell, no roll. 1 Use
65. Ancient Elven Crown: -1 Elven encounters. Permanent.
66. Love Potion: +2 Common or -2 Hamdrel encounter. Use before roll. 1 Use
71. Three Magical Rods: +1 movement after roll. 3 Uses
73. Four Magic Stones: Reroll movement roll. 4 Uses
74. Mist, et al: 2D6 movement on boat. 1 Use
75. Rare Protective Spices: Evade a Trap (not transporting) 1 Use
76. Shell, etc: Random transport to a non-dragon's lair coastal space. 1 Use
78. Wizard's Staff: +1 spells, Wizard only (*)
80. Precious Relic: May encounter demons from 1 space away
81. Chest of Flame: +1 spells, Sorcerer only (*)
87. Jewel of Light: No Island you are on will sink unless it is the last of its type. Another will instead.
89. Windstone: +1 space (not roll) movement, boat travel only. Permanent.
90. Staff of Fire: +1 demon encounters, permanent. Sixes are still illegal after a failed spell.
91. Sacred Engraved Ring: May summon Hound if no animal.
92. Amulet of the Sun: Choose results at High Hollow
93. Sacred Veil: Roll each turn no random, specific, or animal encounter. On a 6, encounter Shrineheart Abbey. Permanent.
95. Magic Oil Lamps: Reroll '1' movement rolls. Permament.
96. Precious Silks: +1 Common encounters. Permanent.

Everyone obtains gems the same way. A player must have an encounter with a high wizard, either through the deck or by finding one on the board and visiting him. He casts Gem Summoning. On a six, the spell fails and the High Wizard leaves. On a five, the spell succeeds, and if the Wizard is the False Wizard, he fails to steal gems. Otherwise, the spell is successful; if the Wizard is not the False Wizard, the player obtains the appropriate gem. If he is, he steals all the player's gems. The player is not permitted to let this event be known to others by word, gesture, etc.

Stranded: A player is defined to be Stranded either if he is trapped and losing turns, in which case, he must be helped if another player encounters him and so chooses, or if he's stuck on an island or islands without boats. The island(s) must not be within swimming distance of a valid target, nor contain one. A valid target is any of Hamdrel, Ruktal, or the player's mentor. In the case of Wizards, the mentor is any Elven island. Note that if one builds a world with Hamdrel's Cottage two or more spaces from any other land, a player may be stranded there without any recourse. Important safety tip: don't do that. A player may be helped by requesting it if he meets the stranded criteria above. Once requested, he may not retract the request unless he leaves the island(s) on which he was stranded and lands on another.

Transporting: A player who transports as his movement rolls the encounter die upon landing. The Druid spells that give an extra turn void this encounter. Demon dispell spells may be re-cast once a player is transported.

Multiple Specific Encounters: Players who have any type of other encounter (player/player, High Wizard, Task Marker, etc.) in a Common Town or Elven Dwelling do not also encounter the Town or Dwelling. All other specific encounters are normally encountered, even if higher priority ones are in the space. They are encountered in the order printed in the rules. Multiple player/player encounters are resolved clockwise from the phasing player.

Repeating Specific Encounters: Before having a specific encounter in a space a second time, a player must leave the space of the encounter. Before having it a third time, he must leave the tile. The only exception is Hamdrel. At Hamdrel's, one may stay three turns, then leave the space, then three more before leaving the tile. If one is not eligible for an encounter, but stays in the space, no encounter occurs. If one was in the space the previous turn for some reason and didn't encounter the specific encounter, then one may encounter it without moving.

Animals: If one gets an animal for N days, that's N turns, no matter how many turns one gets in those days. The card that provides a Flying Horse for four days really means just two turns.

Multiple Task Markers: Some tasks can have parts fulfilled immediately upon the task's granting, even if Task Markers have already been encountered during the turn. New Task Markers are encountered immediately after the current encounter is resolved. Note, however, that if the encounter is a High Wizard, Sorcerer, or Ruktal, and that encounter gave the player the task, he may only fulfil part of it if he is the player's mentor. Specific encounters who are not the player's mentor can normally only perform one service for the player per encounter. An exception is to fulfil multiple task markers. Even a mentor can do nothing more for a player if he is healing the player.

Player/player result 5: In order for tasks to be transferred, a player must be higher level and have more optional tasks than another.

Player/Player Encounters: No encounter happens if either player is not level one or higher.