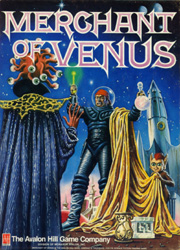 In the "Gazeteer of the Cluster", the rules for Merchant of Venus contain descriptions for each of the different planetary systems in the game. I was disappointed to find that these colorful descriptions had no effect at all on the play of the game. Even the optional rules introduced in The General neglected this possible chrome. So I made up my own.

Whenever a player first arrives at a city (not a spaceport) or Galactic Base, they roll a single d6. If the result is a 6, then a random event has occured. The player then rolls another d6 and looks up the roll on the chart for the planet they just landed on. I have tried to come up with many different types of events, so each planet will have it's own special flair. I also tried to make sure each planet had a balance of harmful and beneficial events.

I have included the descriptions for the systems from the rule book to put the random events into proper context. Hopefully this does not violate any copyright laws.

The primordial material in this system coalesced into a vast sphere of asteroids instead of planets. Explorers built domed colonies to mine this treasure house of minerals, and soon there was an entire civilization mingled among the asteroids. When the Empire fell, this civilization retreated to the central domes, leaving the rest to the ghosts.

Colonists had barely started terraforming this planet when the Empire collapsed. They managed to survive in cave cities while the terraforming continued automatically.

This planet is one big desert of stone and sand, with a few small settlements at oases. The only large cities are in the greencaps at the poles.

This is a giant space station, built to service spaceships and passengers en route to or from the main Galaxy. When the traffic stopped, the service personnel who were stranded there converted it into a city. When the game begins, this station has already been rediscovered.

This oversized, low-density planet has an enormous surface area but tolerable gravity. It has large and varied habitable areas and a very large population.

This system consists of rocks and ice. When the power plants in the system ran out of energy, one city managed to survive by inventing strange folkways to conserve heat.

This oversized moon orbits a gas giant planet that radiates enough energy to give the moon a temperate climate. Little energy arrives from the distant sun.

This technological marvel is a vast doughnut of air, floating in free-fall between its sun and a dense planet. The gravity fields of the sun and planet balance to hold the atmosphere in place, while powerful generators keep the atmosphere dense and protect it against the solar wind. This wonder has existed long enough for an entire ecology of exotic beings to evolve there, but it is a total mystery: the builders are unknown and the generators are so small and cleverly disguised that they have never been found.

This hot, humid world is composed of jungle, rain forest, and swamps. Life there is a constant struggle against the billions of life forms that infest it.

This giant spaceship is designed to carry a whole population of colonists for generations while they travel from star to star at sublight speeds. The ship blundered into orbit around a neutron star, and now it is trapped; it is too massive to escape the star's gravity, and its population is too large to evacuate.

Overpopulation, deforestation, and industrial waste have poisoned the seas, removed the forests, and triggered the "greenhouse effect" on what was once a garden planet. This automatically cured the overpopulation problem, and the survivors are locked in battle to reverse the trend, even as they are evolving to match their new environment.

This is a space station as big as a planet, filled with uncountable cubicles and passageways. Once a trillion beings dwelt there but now only a few remain, clustered near the portals in the outer skin. The inner corridors are dark and still, forbidden places of legend.

This planet was apparently a systemless rogue planet that wandered close enough to a blue giant star to be trapped in orbit. When the planet thawed out it proved to have a nice blend of land, sea, and air, but it is a violent place of hurricanes, earthquakes, and volcanoes, caused by its elliptical orbit and the high-energy radiation from the blue giant.

This sytem survived the fall of the Empire, but it saw constant warfare in the dark centuries that followed. Finally one of the warring planets was reduced to radioactive rubble, leaving the other one, ruined and crippled, to recover in peace.

Except for a few small islands, the surface of this planet is entirely covered by water. Most of the population lives on the giant lily pads that cover the oceans.