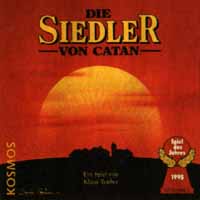 Taking matters into my own hands...we tried a first attempt at a 5-player variation a little while ago. I must say that we didn't work too hard at it; it could use a bunch of analysis and playtesting, but here it is.

Add four tiles at random (not a wasteland) onto two opposite ends of the island, making a rhomboid shape with the two ends cut off. Add appropriate 3? ports and blank sea tiles. Number the four new tiles 3,6,5,4 in sensible order. Start the normal tile numbering from a corner square in the middle of the board (otherwise you'll get an intersection with an 8 and a 6 or two 6s). The robber does not affect the player who rolled the 7. Otherwise, play as normal. The deck limitations for resources are much more likely to come into play in this variation than any others; that adds an interesting twist, in my opinion. Enjoy, and please supply playtest feedback.

Our group decided that the 3-player game wasn't competitive enough, so we use the following rules:

We tried the "poor man's seafaring" with 3 players. It worked reasonably well. I think it'd be better with 3 than with 4, because resources are very limited, and in a 4-player game, one or more players will become very frustrated with a position that is clear to be going nowhere. See http://users.aol.com/spielbank/kmw/dsse.htm for how to play that variant.