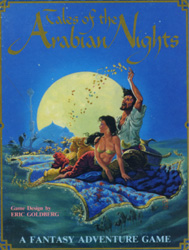 Tinkers to Tales of the Arabian Nights

I've enjoyed Tales of the Arabian Nights for years, but the original game eventually became too easy as we all learned many of the stories. Interestingly, embedded under the stories is a good race game.

For experienced players, we developed a few variants. The most interesting one is these alternate victory conditions. One needs all of: We always use the two-player rules, that is, draw two cards and deal with one of them. Skip the merchant rules.

Initial conditions can be varied to handicap players. The strongest players should be started with one of each point (starting with zero destiny points is no good---a player can get eliminated randomly too easily without a D point to trade away), one skill of their choice (excluding Major Magic, of course...everyone takes Scholarship), and Beggar wealth level (the lowest). Weaker players can be started at higher wealth levels and/or with two or three skills.

Players with a very bad status may choose to start over.

Players may not have more than 20 DPs or SPs. Any extra are lost. If, however, a player loses points while at 20, they go below 20.

Studmuffin rules apply. When drawing cards from the deck for quest extensions, reshuffle unused cards back into the deck, so as to remove only one card for this purpose. Try to accomplish all the objectives before the end of the first deck. If you manage that (it isn't easy), try to have more cards left over. Finishing by the end of the second deck is quite good. Failing to finish by the end of the third deck is disappointing.

Be very careful about getting Sultan too early. By far the most difficult goal is Fabulous wealth, but that's obtained by turning Sultan when you have a treasure. If you lose a wealth level after becoming Sultan, it can take quite awhile to get back to Fabulous.