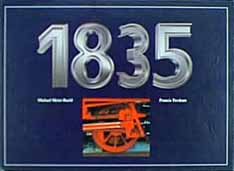 We've been playing 1835 for awhile now and it always seems to turn out differently, even though, at first sight, the game is created as to follow a set course very exactly. Some ways that it does that are: the tile composition is such that only a few serious tile competitions are possible (non-x-shaped green Y tiles come to mind plus the straight plus shallow curve to the right green tile), the companies come out in a predesignated order, and the starting packet yields only a few sensible permutations. Which is what interests me right now. In a four- player game, what starting positions do other groups tend to see?

This is the starting packet:

I've abbreviated thusly. The N-F is the Nuremburg-Furth; the O-B is the Osterbayern; the Pz is the Pfalzbahnen; Minor # are obvious; n-inc are the 10% shares of the Prussian that are privates with that much income until they are turned in; Sx and By are the director's shares of those railroads.

I think that the first player should take Minor 1, but the second player has a choice. He can take the Sx, the N-F (and consequently the By), or pass. Passing will usually allow the other players to force him to pick one of those, so he should choose. Which of the Sx or N-F he should take is not clear to me. Either of those positions seems poor, but competitive. Let's assume he takes the N-F. The third player grabs Minor 2. The fourth player should take Minor 3, I've concluded, since he's going to get the Sx director's share eventually, so he should make sure he gets the 3, too. This ends up with:

Some other constraints and conclusions are that the person who takes the N-F must buy the By directorship. No one else will take it and the game will never begin until he buys it. It's greatly desirable for the Sx owner to have M3. M1 and M4 owned by the same player are much more valuable than owned separately. The order of value of the Minors is approximately 2,4,5,1,3,6.

This has been the start for several of our four-player games. Player one is in a very good position. He begins with the best income and has M1 and M4 working together. He'll end up with the directorship of the Baden and have prepared their track for them in advance. If, heaven forbid, player 4 doesn't take the Pz, player 1 gets a free tile lay on the first turn of his directorship, too. He should have no problems stripping the three minors and getting most of the cash and useful trains they own into the Ba (or perhaps the He) when he owns it. The next best position is player 3. He'll become the director of the Prussian (and, with luck, some other railroad, usually the Wt.) Depending on how well the Prussian does (which depends on other players' ability to strip their minors and the exact timing of the train purchases in the middle game,) he can win dominantly or have no chance. Player 2 is in the third strongest position. Unfortunately, he seems to have to be in conflict with player 4, the loser, at the beginning of the game. In particular, they are in conflict for the placement of the Dresden tile and, more importantly, of the station marker in Dresden. Usually, it seems that the By can manage to do that without failing to get their 70M run completed early. Should the By ensure this by building North though the mountains from Furth turn one? Or should they build West to get the 70M run completed turn two? The former will let them run for 80 with two 2-trains (two-two!) on turn two; the latter only 70, but with only one 2-train. The latter will get them up to 110M more quickly, though.

In any case, while the By will have little or no trouble getting into Berlin and having a pretty strong board position, the By owner is not getting much income early and thus will not be able to buy enough stock early on to win the game. He'll make roughly 74M/turn early on, while player 1 is making 85 and player 3 is making 95. 10M/turn doesn't seem like a lot, but it is. 1835 ends just as the exponential growth pattern of the positions peaks, or slightly after that. Early money is very very crucial. The reason why player 1 is doing better than player 3 early is that the minors are making an additional 70M/turn for him. That money will eventually be company credits for one of this railroads. While that's not nearly as valuable as cash in pocket, it's money that will become useful to him. Player 2 is getting some income in stock value, and while that will become a great portion of his eventual estate, it's not liquid early without giving up the directorship of the By and seriously impacting his long-term upside potential.

So, what alternatives have been found to try to overcome this? I'm sure that there are tricks to help the postions of players 2 and 4; in particular, if they can find a way to work together (how? They each want desperately to put a station marker in Berlin and only one can do so until the 5 closes.) they might be stronger positions. Who'd trust the other not to buy into Dresden? The By will almost never fail to do so, hamstringing the Sx, because they'd be locked out of Berlin (and pretty much the whole map) until phase 3 if the Sx bought into Dresden.